skip to main | skip to sidebar

Visit this link each day to see who's blogging!
43 comments: 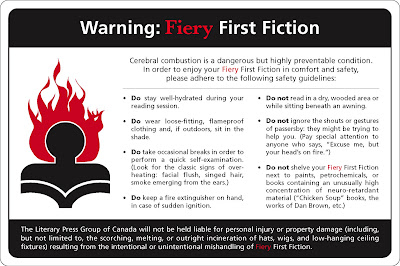 What is Fiery First Fiction?

The Literary Press Group of Canada (LPG) announces its national reading campaign called Fiery First Fiction, which will take place during the month of May 2008.

The campaign features 14 fiction titles from literary presses across the country. The books will be sold in select participating independent bookstores, and supported by readings, contests, reader participation opportunities, giveaways, and a nation-wide tongue-in-cheek promotional in-store campaign warning readers about the hazards of reading Fiery First Fiction books.

The idea came about from the desire to support independent publishers who often take great risks by believing in and signing on new literary voices in a small industry burgeoning with bestselling books from south of the border. “Challenging the blockbuster-reading mentality is not easy,” says Ronda Kellington, Executive Director of the LPG. “Historically, Literary publishers across Canada have introduced some of our greatest literary voices, and yet, each year they face the uphill battle of bringing recognition to emerging new voices with increasingly limited resources. There are so many wonderful books out there that are deserving of attention.”

The selected short story and long fiction titles came into print in early 2008, and feature a roster of new talent from various backgrounds.

“With the Fiery First Fiction campaign, our goal is to introduce readers to new Canadian fiction, get them involved with the work, and create a momentum that encourages more people to walk into a store and pick up a book that isn’t on a bestseller list,” says Martha Bucci, LPG Sales and Marketing Manager. “The diversity of titles in the Canadian marketplace has shrunk and LPG publishers in particular are responsible largely for creating the breadth and depth of literature available to Canadian readers.”
2 comments: 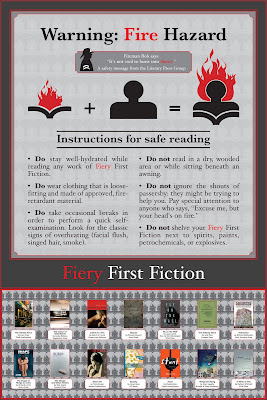 Look out for this poster in participating bookstores.
No comments:

Where can I buy a Fiery First Fiction book and get my free bag? 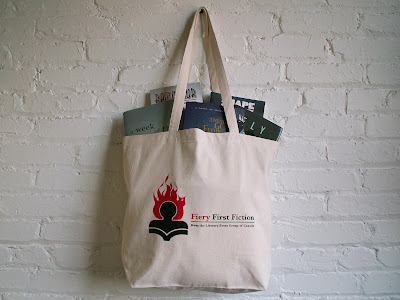 Buy a Fiery First Fiction book and get this durable canvas tote bag that carries just about anything your backpack can and more!

Bag stocks are limited, so make sure you get yours.

You can also visit Indigo's online boutique to see our titles showcased there on special offer.
No comments:

Enter the Open Book Toronto contest this May for your chance to win a set of Fiery First Fiction!